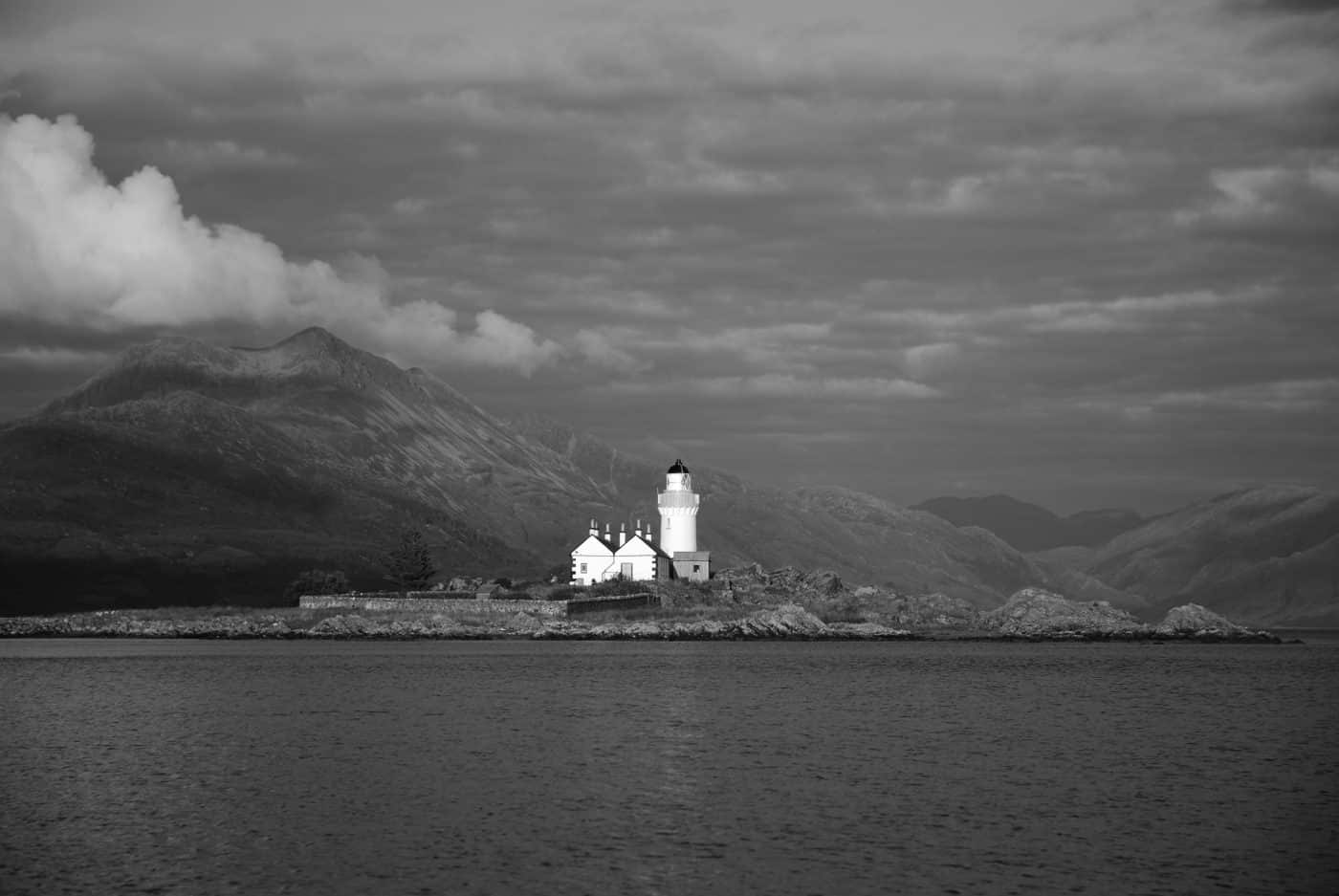 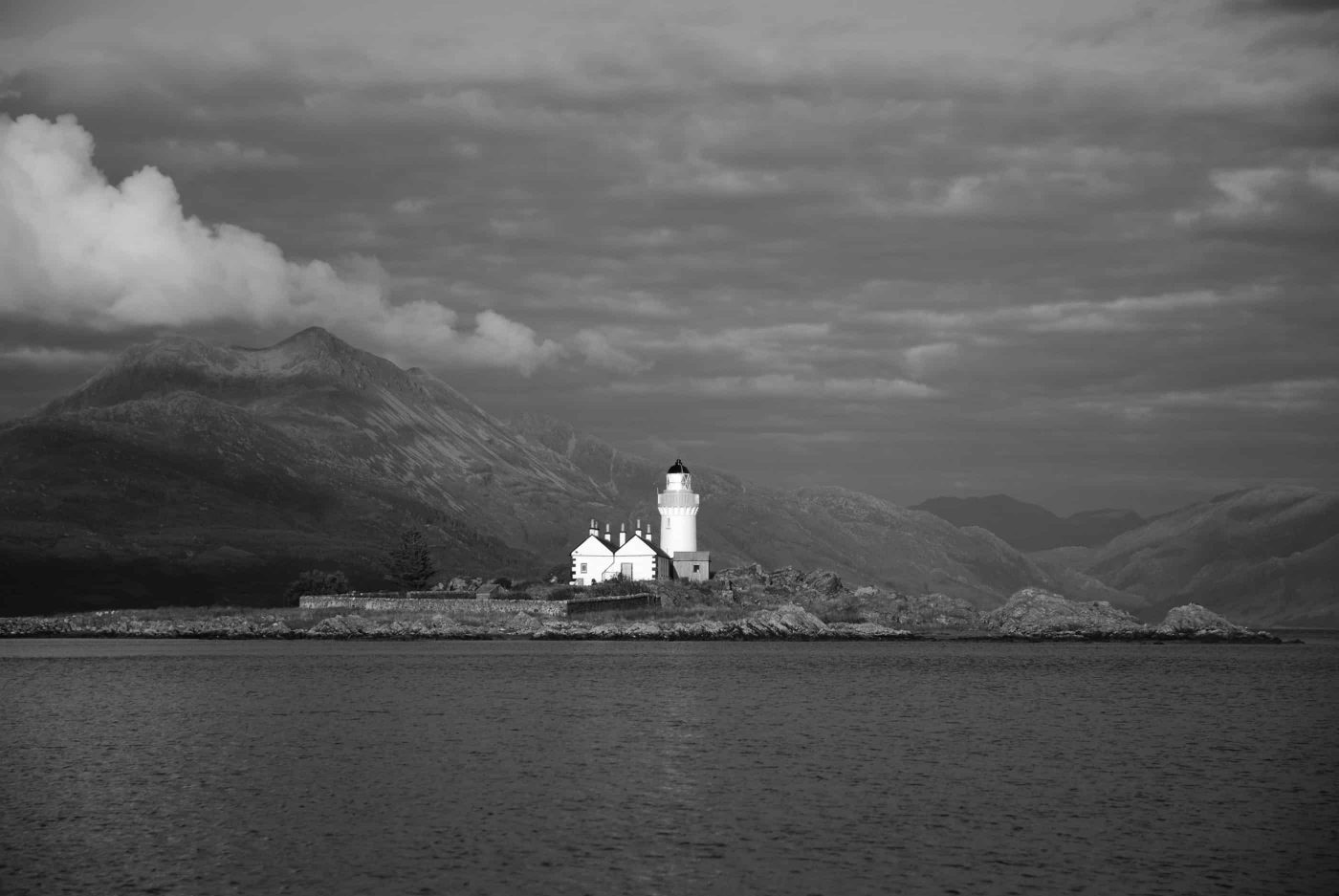 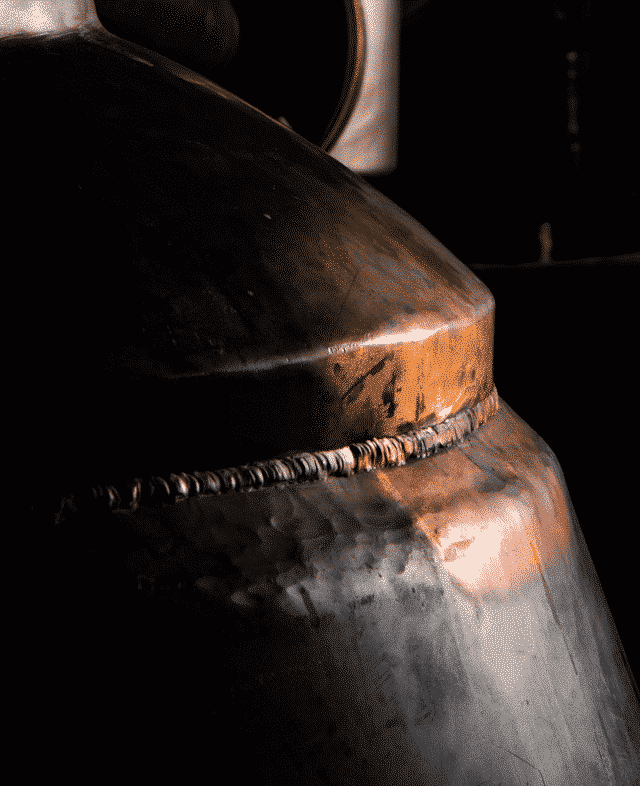 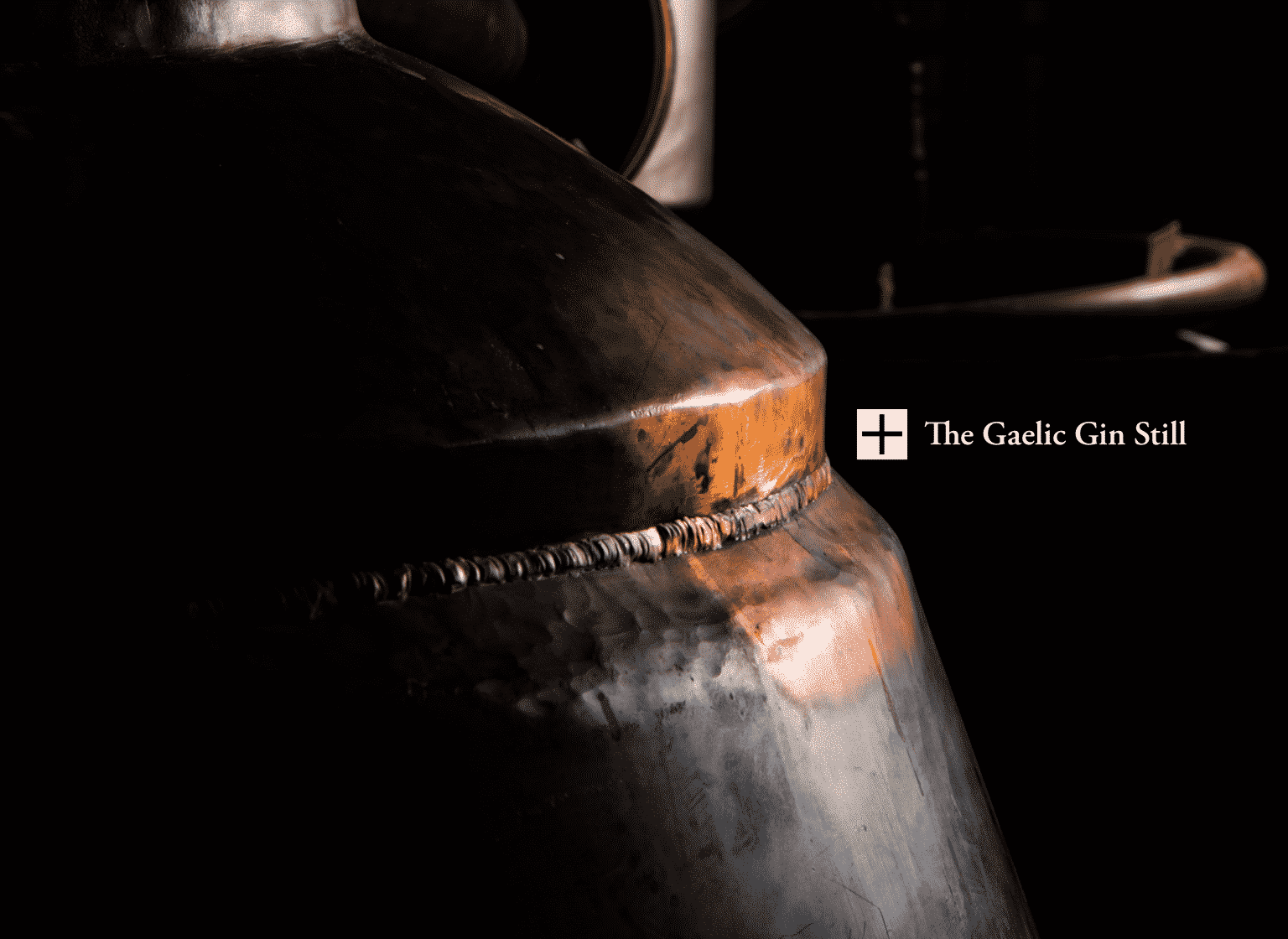 Following an illustrious tradition of the Isle of Skye, Sir Iain Noble acquired what is rumoured to be an illicit whisky still, which Lucilla Noble has had converted to distil gin. Gaelic Gin of course!

The traditional copper still, with its cooling worm housed in an old whisky cask, is identical to the smugglers’ stills that were held in high regard and gained such a fabled reputation throughout the 18th and 19th centuries.  The still is small enough to be transported on the back of a horse – a vital necessity in past times to evade the excise men – we haven’t yet had to test this out!  In its former life the still may well have come into contact with juniper, as juniper wood, whilst aromatic, produces very little smoke, and was therefore ideal for fuelling the countless illicit stills hidden away in the remote glens of the Gaidhealteachd of the Highlands and Islands of Scotland.

With the recent addition of a botanical infusing basket half way along the copper lyne arm, the illicit whisky still is now perfectly at home producing Gaelic Gin, legally of course! Influenced by the copper of the still and the softness of the Skye water, the resulting spirit is exceptional; well rounded, richly aromatic and beautifully balanced. 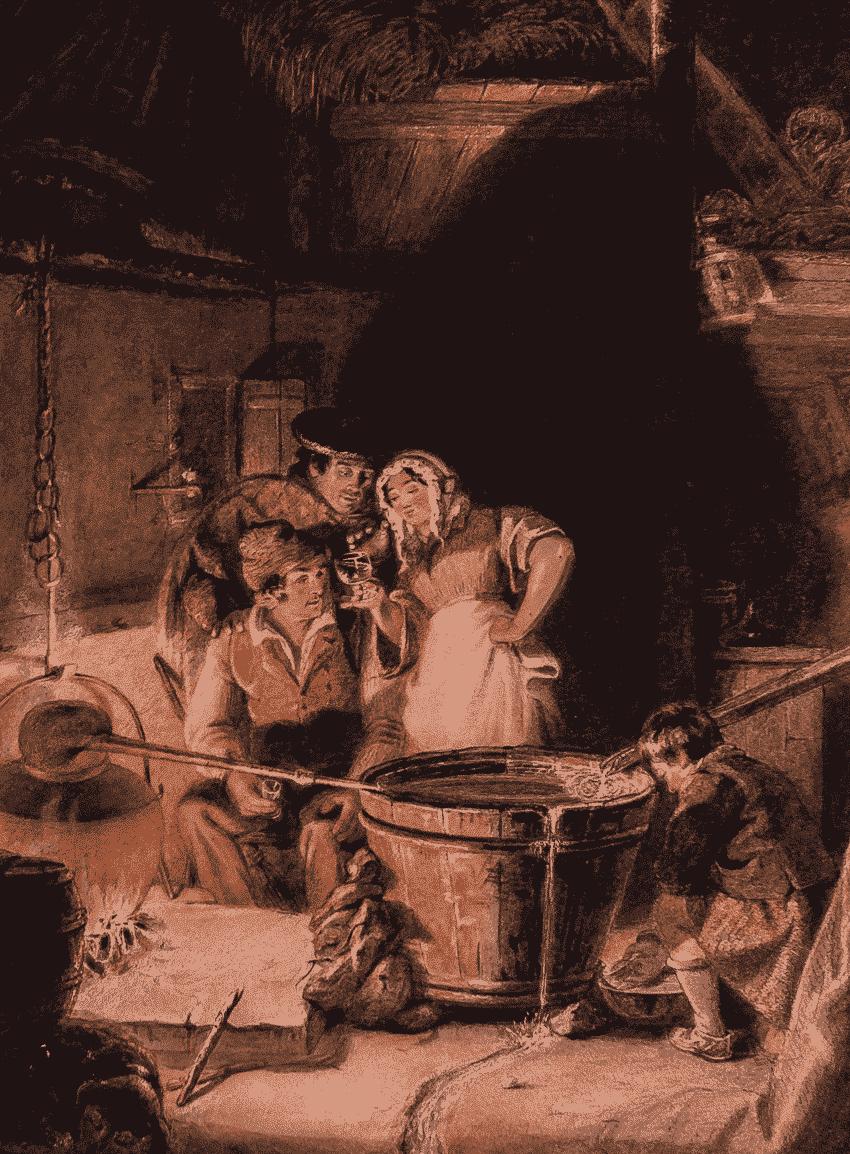 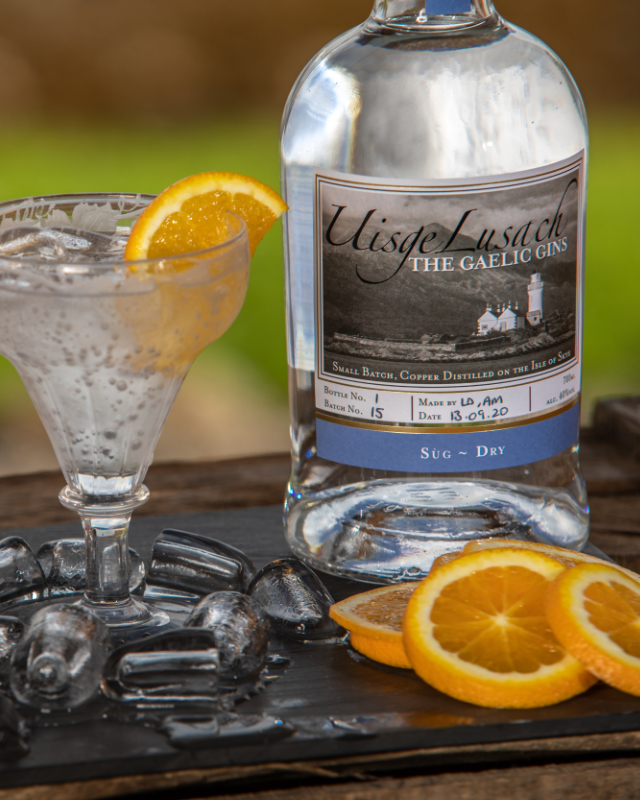 The flavour of the gin is greatly enhanced by being distilled  in a smuggler’s illicit pot still, with the unhurried pace of the vapour infusion influencing Uisge Lusach’s refined rich texture. The juniper is perfectly balanced by a lemon citrus brightness and delicate notes of warming spice. 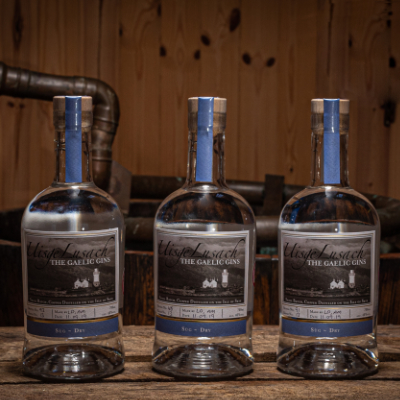 A refined richness of texture and depth of warm aromatic spice, rounded by hints of fresh citrus and lively juniper

Uisge Lusach is smooth and delicate enough to enjoy neat, though it also makes a remarkable G&T – we recommend serving simply with a slice of orange or lime, the best tonic and plenty of ice. 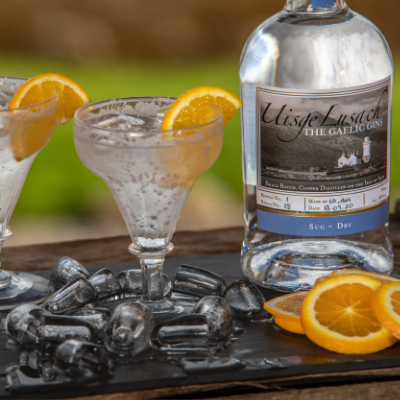 The Gaelic Gin captures the essence of the spirit of the Hebrides; stunningly original, full of character and deeply inspiring to the heart and soul.

This is a hugely characterful gin, distilled from the heart.

Good news for the Gaelic Whiskies!

We are delighted to welcome visitors to the Gaelic Gin Still house, tucked in amongst the historic buildings of Eilean Iarmain that sit at the water’s edge overlooking the old stone pier and the water of the bay.

Eilean Iarmain was originally ‘Eilean Dhiarmaid’ (Diarmaid’s Isle), named after the great Ossianic hero. The isle is now joined to the Sleat peninsula in the south of Skye. Sleat is held in high esteem in the songs and poetry of old, and was referred to as “Sleite riabhach nam ban boidheach” (“brindled Sleat of the beautiful women”). Sleat is where the great warrior Cuchulain learned the martial arts and where Ossian and the Fenians arrived over the seas from Ireland.

Eilean Iarmain enjoys spectacular views across the water to the lighthouse of Isle Ornsay and beyond to the majestic hills of Knoydart. Built in 1869 by the uncle of the famous author Robert Louis Stevenson, the lighthouse continues to be a familiar beacon to all those sailing through the Sound of Sleat.

During the boom days of the herring industry it was said that it was possible to walk across to the island over the numerous boats moored in the bay.  The small yard where the Gaelic Gin house now stands was once a cooperage which served to supply the small wooden barrels required to transport the salted herrings to places further afield.

With Uisge Lusach receiving high acclaim, the busy shop selling The Gaelic Gins and The Gaelic Whiskies at Eilean Iarmain is a popular destination. 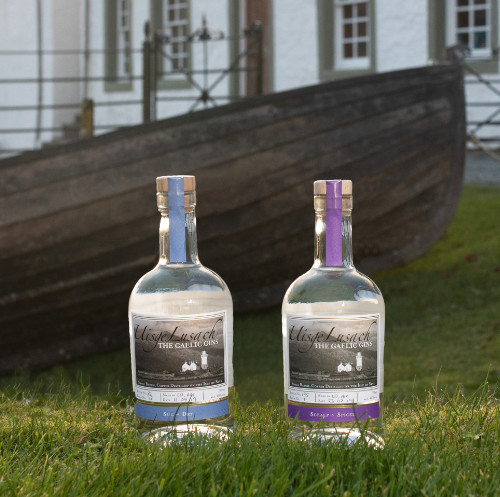 In the nineteenth century juniper grew so abundantly across the Highlands that the berries were picked by the sackload and transported by horse and cart to Inverness and Aberdeen to be exported to Dutch gin distillers.  Over the years the native hardwood habitats of the Highlands have suffered from progressive depletion.

In establishing Fearann Eilean Iarmain in 1972 Sir Iain Noble was committed to supporting and developing the linguistic and cultural heritage of Gaelic; in education, in the work environment and in the community.  As part of these endeavours Sir Iain invested in the environmental heritage of Sleat, pioneering the establishment of one of the first native woodland regeneration schemes in Scotland.  Through the foresight of Sir Iain native juniper was included in the regeneration and planting schemes.  Though their locations remain a carefully guarded secret, their progress to maturity has been monitored closely, with much enthusiastic anticipation.

Fearann Eilean Iarmain continues to invest in environmental heritage and its diverse wildlife.  In recognition of the work being achieved through a long term programme of environmental conservation ensuring this unique landscape for future generations, Fearann Eilean Iarmain was chosen as the winner of the prestigious Golden Plover Award for moorland management in 2017.

We are busy developing a range of small batch limited edition liqueurs.  These exclusive liqueurs reflect the changing seasons and the diversity of organic botanicals from the abundance of wild plant species of the hill, moor and woodland of Fearann Eilean Iarmain. 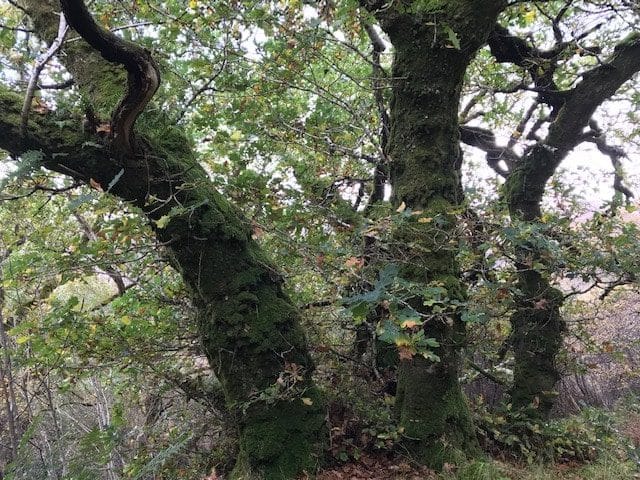 Now a tranquil haven on the Sound of Sleat, Eilean Iarmain was once the Isle of Skye’s busiest port, with several steamers arriving every day from all over Scotland, and a thriving shop serving customers from Glenelg, Broadford and further afield, selling everything from an anchor to a needle. King Edward VII landed at Eilean Iarmain around the turn of the century. Unfortunately the tide was out, but he was carried ashore, and spent around £80 in the shop – a vast sum in those days. The bay once supported a fleet of herring smacks, but with the gradual decrease in the shoals of the Silver Darlings there was the subsequent loss to local livelihoods.

It’s no surprise then, with the decline of the fishing fleet, that the able-bodied young men of the area – who had the sea in their veins and an inherited disposition of Celtic wanderlust – found work on ships further afield, and it was a Hebridean crew who ran into difficulty one squally winter’s day, blown off course by a fearsome storm.

They had set out from Port Glasgow, where hasty repairs had been carried out on one of the old engines of the venerable “Pibroch”, and were bound on a course across the Atlantic.  Bearing a precious cargo of gin – intended for the speakeasies of America’s prohibition years – they were cheerful with the heady thought of adventure. However, as “The Pibroch” broached the open sea they were hit by the full force of an Atlantic storm.  As the day wore on the unfortunate vessel was driven further and further north, valiantly battling on after the hastily repaired engine had failed.  As darkness fell, the strengthening winds swung round to the west, and limping on one remaining engine, the gale blew “The Pibroch” on a course back towards the mainland.  The storm raged on throughout the night…

Squinting through the storm driven rain from his post at the helm, the skipper, whose family had belonged to Sleat for countless generations, recognised the coastline.  It was familiar to him from his boyhood days.  As the lighthouse of Isle Ornsay hove into view he felt confident that they would be delivered safely onto dry land, but with a further stroke of misfortune the remaining engine spluttered into silence: they were at the mercy of the wind and the waves.  With a thundering crash, “The Pibroch” hit the rocks.

As the tide turned the boat was left high and dry, teetering precipitously on the rocks below the lighthouse and listing to starboard, but miraculously undamaged.  The wet and weary crew managed to clamber ashore, crossing the spit of dry land at the Dornaidh.  In the misty light of a chill winter dawn their hearts lifted at the sight of Tigh Òsda Eilean Iarmain, making the storms of the night seem but a bad dream.

The welcome warmth of the Tigh Òsda greeted them as they walked in the unlocked door.  “Gu sealladh an t-àgh orm!” exclaimed Morag, as her eyes fell on the bedraggled crewmen.  And then, with cries of joy and amazement, she recognised her father’s cousin, the skipper!  “Thigibh a-steach! Come on in!” she cried. As the light of day fell over the landscape of Sleat the whispered word was already travelling on the wind through the township of Eilean Iarmain… “there’s a vessel run aground on the island, and her hold is full of gin!”

The crew, thankful that they had been spared, thought it an opportune occasion to broach a bottle or two and raise a glass in celebration of their deliverance.  The folk of Eilean Iarmain – who had a fine appreciation of mountain dew and the like – were happy to assist in making sure that the quality of the spirit was up to the expectations of their Celtic brethren across the broad Atlantic.  The ceilidh lasted long into the night, it was a “Ceilidh gu madainn”, and Eilean Iarmain’s association with gin was born.

The legend of the lighthouse continues today… with a story of Gaelic Gin galore! 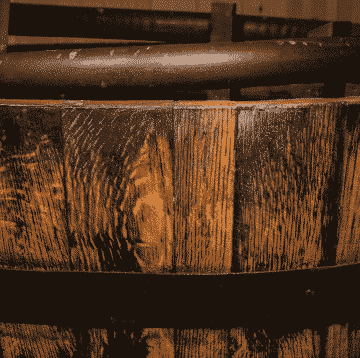 Continuing the tradition of The Gaelic Whiskies, our new gin reflects and reinforces the rich Gaelic heritage of the Isle of Skye. Distilled using the island’s soft water, taking the “Uisge” from Uisge Beatha (Scotland’s water of life: whisky) seemed very appropriate. “Lusach” (meaning herbaceous or abounding in herbs) presented itself as the perfect partner.

Another front runner would have translated as “water of health”, but we were obliged to be a little cautious of claiming any health giving properties. That being said, we’ve not yet managed to taste Uisge Lusach without a spontaneous sense of wellbeing and a smile creeping on to our faces… 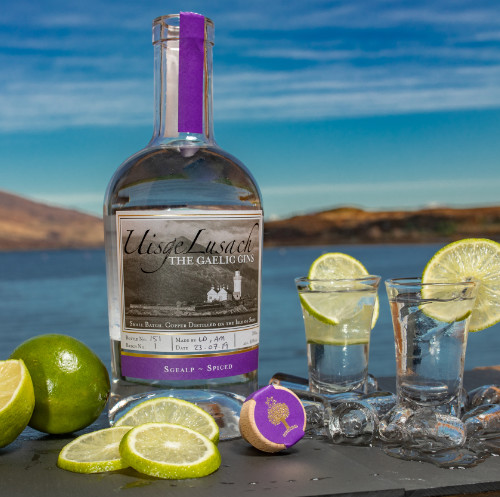 We look forward to welcoming you back to the Isle of Skye very soon.
Our full range of Gaelic Whiskies and Gaelic Gins are available in our online store - we're happy to ship to all UK addresses.